"Brian Huskey, Our Close Friend" is the fourteenth episode of Hollywood Handbook.

Sean and Hayes ring in the new year with a look back at their favorite podcast moments of 2013. Then BRIAN HUSKEY joins the boys for a table read of TEEN POPE, one of Brian’s many scripts currently in development at studios. 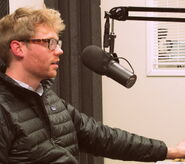 Sean in the studio
Add a photo to this gallery
Retrieved from "https://hollywoodhandbook.fandom.com/wiki/Brian_Huskey,_Our_Close_Friend?oldid=10356"
Community content is available under CC-BY-SA unless otherwise noted.