"Clark Duke, Our Close Friend" is the fifty-fourth episode of Hollywood Handbook.

Hayes and Sean start the show by weighing in on the announcement of the new all-female Ghostbusters cast. Then, CLARK DUKE is in the studio to take us on a tour of his career and talk about where he went to college, Weezer, and golf. After, the boys play a game of “That's Wheely Interesting” and the Popcorn Gallery is back to ask Clark about being a party teenager, cheating, and sharing the spotlight.

What are the fashion rules for your family? "

What are some of your favorite funny bumper stickers? "

Hayes, Sean, and Clark Duke in the studio 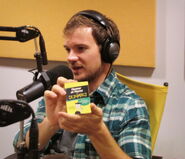 Sean suggesting a game of Humor for Dummies

Hayes in the studio
Add a photo to this gallery
Retrieved from "https://hollywoodhandbook.fandom.com/wiki/Clark_Duke,_Our_Close_Friend?oldid=10277"
Community content is available under CC-BY-SA unless otherwise noted.