"Gil Ozeri, Our Close Friend" is the fifty-first episode of Hollywood Handbook.

Sean and Hayes basically shred the whole Apple company for certain failures in their products, then open up the Teaser Freezer once more to do a close reading of “The Equalizer” where Engineer Brett makes a surprising move. Then GIL OZERI arrives to dish on his role in various police killings, perform characters from his one-man shows, and answer questions from the Popcorn Gallery gang. 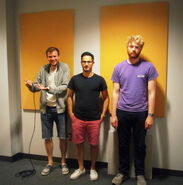 Hayes, Sean, and Gil Ozeri in the studio

Gil Ozeri in the studio

Sean in the studio

Hayes is taking a picture of Brett Morris hosting Hollywood Handbook
Add a photo to this gallery
Retrieved from "https://hollywoodhandbook.fandom.com/wiki/Gil_Ozeri,_Our_Close_Friend?oldid=10280"
Community content is available under CC-BY-SA unless otherwise noted.