Pro Version
Suck on These
Draw the Blinds Up
Popcorn Gallery

"Grace Helbig, Our Close Friend" is the sixteenth episode of Hollywood Handbook.

Sean and Hayes quickly dig into some blind items as they name names and Draw the Blinds Up on Hollywood’s biggest stars. Then new media celeb GRACE HELBIG drops by to give listeners some tips on how to create a presence online and explain how vlogging on YouTube is very different than Saved by the Bell. Finally, Grace tells us which A-List Hollywood celebs she would most like to see fail as she reaches into the Popcorn Gallery.

Hayes, Sean, and Grace Helbig bussin' up in the studio

Sean and Grace Helbig in the studio 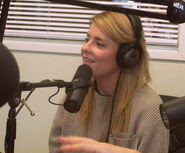 Grace Helbig in the studio
Add a photo to this gallery
Retrieved from "https://hollywoodhandbook.fandom.com/wiki/Grace_Helbig,_Our_Close_Friend?oldid=10354"
Community content is available under CC-BY-SA unless otherwise noted.