"Jessica St. Clair and Lennon Parham, Our Close Friends" is the thirty-seventh episode of Hollywood Handbook.

Sean and Hayes start off the show with “Rumer Millis”, where they break the news of a new Star Wars movie and explore some insider info about plot predictions and characters. Then, the very funny JESSICA ST. CLAIR and LENNON PARHAM from Playing House come by to talk about the Maleficent premiere and chicken fingering/pigeon holing at Chik-fil-A headquarters, and then the guys mediate the official dissolution of their partnership. Finally, the Popcorn Gallery is back to ask about playing “House”, getting peed on by Bruce Springsteen, and Tom Lennon’s biopic.

Sean and Lennon Parham in the studio

Hayes and Jessica St. Clair in the studio 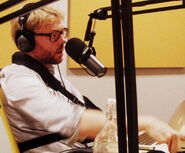 Hayes in the studio
Add a photo to this gallery
Retrieved from "https://hollywoodhandbook.fandom.com/wiki/Jessica_St._Clair_and_Lennon_Parham,_Our_Close_Friends?oldid=10326"
Community content is available under CC-BY-SA unless otherwise noted.