"Johnny Pemberton, Our Close Friend" is the forty-fifth episode of Hollywood Handbook.

Sean and Hayes are extremely pissed about having to do so many Ice Bucket Challenges all week. On the bright side, they talk about some very exciting development opportunities involving newspaper comic strip properties. Then guest JOHNNY PEMBERTON arrives to speak on his famous charity stunts and eat a whole pack of gum for Engineer Sam. Finally, the Popcorn Gallery returns, and Johnny explains points on the back end and the dangers of baseball tricks. ​

Hayes, Sean and Johnny Pemberton in the studio

Johnny Pemberton and Hayes bussin' up in the studio

Hayes and Sean bussin' up in the studio 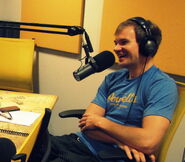 Sean bussin' up in the studio
Add a photo to this gallery
Retrieved from "https://hollywoodhandbook.fandom.com/wiki/Johnny_Pemberton,_Our_Close_Friend?oldid=10286"
Community content is available under CC-BY-SA unless otherwise noted.