"Jon Gabrus, Our Close Friend" is the twenty-second episode of Hollywood Handbook.

Sean and Hayes address some fan feedback and announce some more Notscar winners. Friend of the show and Guy Code regular JON GABRUS joins the guys to discuss emotions in movies, side chicks, and viral videos. Then, the Popcorn Gallery delves into controversial topics like The Da Vinci Code, the Nerdist podcast, Pellegrino, MTV, and who to avoid at Oscar after-parties. 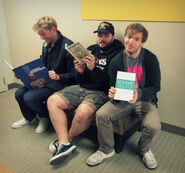 Sean in the studio

Jon Gabrus in the studio
Add a photo to this gallery
Retrieved from "https://hollywoodhandbook.fandom.com/wiki/Jon_Gabrus,_Our_Close_Friend?oldid=10348"
Community content is available under CC-BY-SA unless otherwise noted.