That's A Wrap
The Hobbies: Desolation of Smaug
Engineer My Career

"Kyle Newacheck, Our Close Friend" is the tenth episode of Hollywood Handbook.

Sean and Hayes remember the late Nelson Mandela during That’s A Wrap and talk about the other side of the business known as The Hobbies. Later, KYLE NEWACHECK (director/star of Workofholics) stops by to speak on his earlier Hong Kong action films, living the studio life, his time as a film teacher, and co-directing an upcoming film with Nathan Lane.

Hayes, Sean, and Kyle Newacheck in the studio 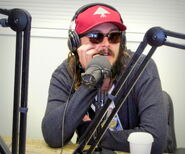 Kyle Newacheck in the studio

Sean in the studio
Add a photo to this gallery
Retrieved from "https://hollywoodhandbook.fandom.com/wiki/Kyle_Newacheck,_Our_Close_Friend?oldid=11101"
Community content is available under CC-BY-SA unless otherwise noted.