"Mikal Cronin, Our Close Friend" is the thirty-fifth episode of Hollywood Handbook.

Hayes and Sean start off the show talking about their love of French films with a French documentary crew in-studio and do a segment where they explore how different music can change the tone of a movie scene. Then, the guys bring in the first person signed to their record label, Mikal Cronin, for a special musical episode where they talk about Neil Young and Leonardo Da Vinci’s adventures. Also, is Engineer Cody stealing cable from the Earwolf studio? Tune in to find out.

Hayes, Mikal Cronin, and a crew member from the documentary in the studio

Mikal Cronin playing guitar and Hayes bussin' up in the studio 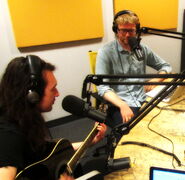 Hayes and Mikal Cronin in the studio

Hayes and Sean in the studio

Sean in the studio
Add a photo to this gallery
Retrieved from "https://hollywoodhandbook.fandom.com/wiki/Mikal_Cronin,_Our_Close_Friend?oldid=10328"
Community content is available under CC-BY-SA unless otherwise noted.