"Nick Kroll, Our Close Friend" is the eighty-third episode of Hollywood Handbook.

After the guys voluntarily decide not to do an intro segment due to circumstances under their control, NICK KROLL shows up to discuss what a big fan he is of the show, talk about why his movie Adult Beginners is a nice movie, and play some clips from his favorite pilots of this season. 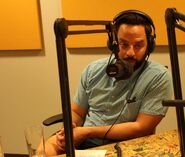 Nick, Hayes, and Sean in the studio