Year of Fails
Riddle Me This
Pro Version

After a week hiatus, Sean and Hayes are back to discuss what they did with their time off and examine the top fails of last year. Then, podcast legend PAUL F. TOMPKINS stops by as the first ever repeat guest to analyze the highlights of 2014, explain the rules of “Riddle Me This”, and talk about the perks of being a nerd.

Hayes, Sean, and Paul F. Tompkins bussin' up in the studio

Paul F. Tompkins with the air horn app. Hayes in the back 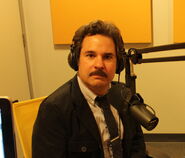 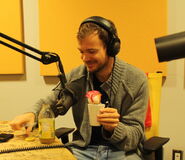 Sean with a flower in a cup in the studio 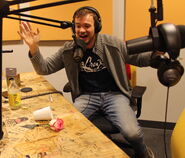 Sean after he spilled some water on the studio table
Add a photo to this gallery
Retrieved from "https://hollywoodhandbook.fandom.com/wiki/Paul_F._Tompkins_Again,_Our_Close_Friend?oldid=10228"
Community content is available under CC-BY-SA unless otherwise noted.