"Sinbad, Our Close Friend" is the forty-second episode of Hollywood Handbook.

Hayes and Sean are pissed about how the new movie Boyhood ripped off their long-time project Engineer Cody Boy and they assist a fan that wrote in asking for relationship help. Then, SINBAD is in the studio with his daughter and dog to discuss being taken by aliens, his feelings on selfies, what it was like to invent comedy, and he takes us behind the scenes of Jingle All the Way. Finally, the guys talk about their beef with Kel and the Popcorn Gallery asks Sinbad about mustaches, handshakes, death, and more!

Sinbad, and Paige Bryant with her dog in the studio

Sinbad in the studio

Hayes bussin' up in the studio 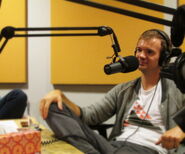 Sean in the studio
Add a photo to this gallery
Retrieved from "https://hollywoodhandbook.fandom.com/wiki/Sinbad,_Our_Close_Friend?oldid=10289"
Community content is available under CC-BY-SA unless otherwise noted.